If you think you see somewhere familiar when you are watching new drama LIFE on BBC One then you might just be right as the series was filmed primarily on location in and around Manchester with its production & studio base at Space Studios in West Gorton and location permissions facilitated by Screen Manchester. The series filmed at a wide variety of locations in and around the city, some of which include; St Peter’s Square, Little Peter Street, Peveril of the Peak, Spinningfields, The Woodstock (Didsbury), Ancoats, The Grill on New York Street, plus many more! 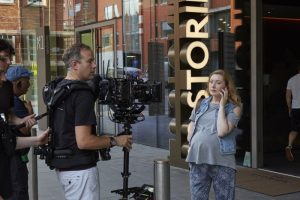 Stephen Cheers, Location Manager – Life (Drama Republic for BBC) says, “It was a pleasure liaising with Screen Manchester on Life and we worked closely with them on our numerous location requests across the city. They were able to facilitate and permit a wide variety of applications, from road closures for stunt sequences to traffic management requests and driving sequences. Manchester has a treasure trove of beautiful locations and I very much look forward to working with the team again”.

Bobby Cochrane of Screen Manchester adds,” Working with Drama Republic is always a pleasure and Stephen selected some of the City’s most iconic locations which time after time prove themselves to be extremely versatile. Life is already making its mark as yet another quality high end drama.  We are happy to do anything we can to open the city up to help producers realise their vision.“